I recently posted this picture of amassed corn stalk residue on my The Farmer’s Life facebook page with the description “Water has caused crop residue to accumulate in some areas creating a thick mat. In our no-till fields. We may have to burn a few of these to assist the planter in placing seed correctly.”  The first comment on the photo resulted in the post you are reading right now.  That comment read “What’s a no till field? Why would you not till a field?”  A great question.  There are many kinds of tillage including not tilling at all.

No-till is just what is sounds like.  A true no-till system avoids disturbing the soil with tools like chisel plows, field cultivators, disks, and plows.  Not all of our acres are no-till, but we have been doing less tillage as of late including putting more acres into no-till.  I’m 32 years old and I’ve never actually ran a moldboard plow over a field aside from the single acre we took turns playing on a few years ago in our 1956 John Deere 70 Diesel and three-bottom plow.  I might lose some farmer points here, but I don’t even know how to plow a field properly.  Lack of experience I guess.  A plow could be considered the polar opposite of no-till.  A plow flips over the top layer of soil incorporating nearly all residue into the soil.  No-till relies on natural processes to break down residue from the previous crop.   Advantages

END_OF_DOCUMENT_TOKEN_TO_BE_REPLACED

At the grocery today I went to get some oats from the bulk bins to make muesli and I was hit with some unwelcome sticker shock. 89¢ a pound! That’s up from 69¢ a pound for as long as I’ve been paying attention (a little over a year). For those counting on their fingers and toes, that’s a 28% increase. An increase in the cost of my staples is a real punch in the gut right about now for an aspiring food wonk who needs a job (hint, hint Corby Kummer). When I got home I needed to know what my supermarket was trying to do to me. 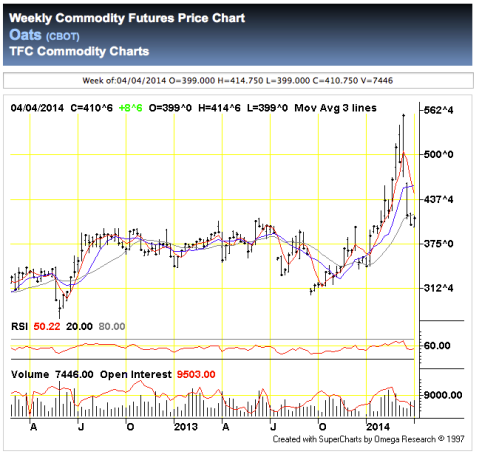 So what happened near the beginning of the year? This:

Feb 6 (Reuters) – The U.S. oat market soared to an all-time high on Thursday, ignited by a razor-thin supply of oats moving into the United States from top exporter Canada in the wake of logistical nightmares. Chicago Board of Trade oat futures rose the 20-cent daily trading limit – notching a record high of $4.63-1/4 a bushel and surpassing the previous record of $4.59-3/4 set in August 2008. That topped a month-long rally, with oats climbing 35 percent since early January.

Extreme cold and heavy snowfall this winter has caused railroads to run shorter trains and slowed movement of bulk commodities, crude oil as well as grains, out of Canada. The harsh weather, coupled with record-large Canadian wheat and canola harvests, has overwhelmed the Canadian National Railway Co and Canadian Pacific Railway Ltd, resulting in a shortage of some 40,000 grain hopper cars needed to move crops to port or U.S. customers.

. . . “In the prioritization of who gets railcars, grain isn’t on the top of the list – it’s not the highest revenue. And within the grain list, oats is not at the top of that list either,” McCambridge said. “Supplies could be tight for some time.” The United States imports more than half of the 160 million bushels of oats it uses annually to produce breakfast foods and snacks as well as feed for livestock. Oats are mostly fed to horses but they are also finding their way into pig diets this winter to help fight off the effects of a deadly pig virus, Porcine Epidemic Diarrhea virus, or PEDv, analysts said.

END_OF_DOCUMENT_TOKEN_TO_BE_REPLACED

I was glad to see that Ensia framed food waste as an environmental problem, rather than a ‘feed the world’ problem. If you aren’t throwing out that half an order of fries, it means it’s not getting produced and wasting inputs. It doesn’t magically reappear in Ethiopia.