From a food standpoint, a pirate’s life was problematic. Being at sea and without easy access to major seaports meant that there was rarely a steady supply of food and hunger was a regular aspect of day-to-day living. Much of their lives were spent on board a ship, and perpetually damp conditions put normal pantry staples such as flour and dried beans at high risk of mold. Climate also presented preservation problems: if sailing in warmer regions of the world, such as the Caribbean, keeping fresh fruits and meats was near impossible. Fresh water was also difficult to keep during long sea voyages because it could develop algae scum. By contrast, alcohol would never spoil, making beer and rum the preferred preferred beverages. Rum, in addition to being consumed straight up, was used along with cinnamon and other spices to sweeten stagnant water and make grog. Dried meats and hardtack, a relatively shelf-stable biscuit, were regular parts of a pirate’s diet, although the latter was frequently infested with weevils.

SLIDESHOW: THE SAD STATE OF SCHOOL LUNCH IN THE U.S.
HuffPostTeen

The photos come to us from the youth nonprofit DoSomething.org, who have asked teens to share photos of their school lunches throughout the month of September. The full gallery is on the Do Something site, and users can vote to “toss” or “eat” each photo.

As demonstrated by the cringe-worthy images above, it’s an effective campaign idea — and the nonprofit plans to use the data gathered to create a “heat map” of school lunches in the U.S. Their goal is to raise awareness of the sad state of nutrition in public schools.

For the past few weeks, the culinary arts students at University in Providence, R.I., have been working with some less-than-seasoned sous chefs.

One of them, Clinton Piper, may look like a pro in his chef’s whites, but he’s struggling to work a whisk through some batter. “I know nothing about baking,” he says.

Luckily, he’s got other qualifications. Piper is a fourth-year medical student at , and he’s here for a short rotation through a new designed to educate med students and chefs-in-training about nutrition.
Johanna Terron, 14, has lost over 20 pounds over the past year. She receives a prescription for fruits and vegetables from her pediatrician at Lincoln Hospital.

“I think it’s forward thinking to start to see, to view food as medicine,” he says. “That’s not something that’s really on our radar in medical education. But with the burden of disease in the United States being so heavily weighted with lifestyle disease, I think it’s a very, very logical next step.”

2)You portray meat being processed and coming straight out of factories. Where do you think your meat comes from? I’m a meat scientist and have been in PLENTY of “Factories” that produce YOUR products. That’s right, farmer John isn’t killing and processing your meat on the family farm, it’s all coming from a factory. So please don’t act like just because you carry an “All Natural” label your products are exempt from processing.

3)And then there’s this; 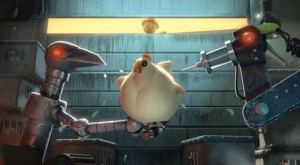 Really Chipotle, what is this? Are you simulating farmers pumping hormones into their chicken so they grow big and fat? Let’s talk about that for a second; hormones are ILLEGAL, so since they are illegal, they are NOT used in poultry production. My family raises commercial poultry, and let me tell you, there is no “shot giving” to any of those animals. I couldn’t imagine giving 100,000 birds an individual shot. THIS DOESN’T HAPPEN.

“We fully expect golden rice will continue to be a lightning rod in this debate,” said Alex Reid, a spokeswoman for the Gates Foundation on its agricultural programs. The Seattle philanthropy supports research into a variety of GM crop technologies as one of many options aimed at improving agricultural productivity and utility in poor communities, Reid said, but their spending on GMOs remains less than 10 percent of the entire agricultural program budget. She noted that the Gates Foundation has spent about $2 billion on agriculture since adding that to its humanitarian portfolio in the mid-2000s. The most recent annual report, Reid said, put agriculture spending at more than $370 million in 2011 (with the golden rice project getting about $10 million).

Support for golden rice research also comes from the Rockefeller Foundation and the US Agency for International Development.

“If it turns out to be safe an effective, we would support it,” she said. “For now, we just see it as one of many options. We would describe our position on this as ‘technologically agnostic,’ meaning we are neither for or against GM crops. We just want to use what works.”

GOLDEN RICE NOT SO GOLDEN FOR TUFTS
Martin Enserink | Science

A study in which Chinese children were fed a small amount of genetically modified rice violated university and U.S. federal rules on human research, according to a statement issued yesterday by Tufts University in Boston, whose scientists led the study. Tufts has barred the principal investigator, Guangwen Tang, from doing human research for 2 years and will require her to undergo training in research on human subjects.

In August 2012, Tang and colleagues published a study in The American Journal of Clinical Nutrition showing that golden rice is a promising source of vitamin A in Chinese children aged 6 to 8 years old. The study ignited a media firestorm in China a few weeks later, after Greenpeace issued a statement claiming that the children were used as “guinea pigs” and labeling the study a “scandal of international proportions.” Three Chinese collaborators who initially denied involvement in the study, according to media reports, were punished for their participation in December, following an official investigation in China, and parents of the children received generous financial compensation from the Chinese government.

. . . The reviews found no evidence of health or safety problems in the children fed golden rice; they also concluded that the study’s data were scientifically accurate and valid. Indeed, Souvaine’s letter to the USDA stresses that the results “have important public health and nutrition implications, for China and other parts of the world.”

behind the stacked boxes and eager volunteers is what author Andy Fisher calls an unholy alliance between food banks and corporations, many of whom earn big tax credits and glowing PR for donating money and food to anti-hunger groups.

It gets worse, he says: The country’s largest food banks are governed by boards dominated by corporations, including Fortune 500 industrial food companies like Walmart, ConAgra, and major grocery chains. As many as a quarter of the board members at major food banks come from Fortune 500 or Global 500 companies, Fisher found.

AMERICAN FARMERS SAY THEY FEED THE WORLD, BUT DO THEY?
Dan Charles | NPR

It seemed that this dispute needed a referee. So I called , an economist at Cornell University who studies international agriculture and poverty.

“They’re both right,” he says, chuckling. “Sometimes the opposite of a truth isn’t a falsehood, but another truth, right?”

It’s true, he says, that bigger harvests in the U.S. tend to make food more affordable around the world, and “lower food prices are a good thing for poor people.”

What excites me most about cover crops is keeping more of what we have and potentially using less inputs in the future. I feel that increasing organic matter alone will be a great improvement to our farm even without all the other benefits. As organic matter increases soils can handle water better and hold on to and provide more nutrients to a growing cash crop. Improved soil structure means our crops will grow deeper roots. Having an active root system in the ground twelve months of the year instead of six means the beneficial organisms in the soil will be more active which is really good.

Nitrogen is one of our most expensive and most necessary inputs. If cover crops can allow us to either use less nitrogen or at least do a better job of effectively using the nitrogen we apply that will be a huge bonus for corn. Boosting yields on one end and cutting costs on the other end is a pretty great combination. Cover crops aren’t free, but I think their benefits will far exceed the costs.

He told the group that many in the majority party in the House oppose not only the food stamp provision, officially the Supplemental Nutrition Assistance Program, but any type of Farm Bill itself.

Peterson said southern states used to elect representatives who were concerned about agriculture. However, he said, the last two elections saw winners emerge from the South who could not “care less about farmers.”

“They want to get rid of farm programs, cut the budget,” Peterson said. “It’s a different world.”

A very different world could be coming if a Farm Bill is not approved.

Her husband, John, the mayordomo of the acequia at their farm, was also reluctant at first. By May, friends with the acequia association persuaded the Boneys to set aside a test plot — 100 feet long and 70 feet wide — and install drip irrigation to grow lettuce, chard and other vegetables. It’s the first time such irrigation is being considered for wide use in the county.

Antonio Medina, who encouraged Boney to try drip irrigation, was once uncomfortable with straying from the old ways. But the 75-year-old Medina has never seen a drought like this.

The recent destruction of Golden Rice trials in the Philippines has me thinking again about how crop genetics, including biotechnology, can help in reducing malnutrition. Greenpeace and others would have us believe that home gardening and supplements are the solution, but unfortunately it’s just not that simple. On the other side, I’ve seen quite a few short posts dismissing the potential of gardens and supplements but haven’t seen anyone go into the details. Let’s examine them thoroughly.
The problem

Let’s start with some good news: we have made great strides in reducing hunger. Millennium Development Goal number 1c, set by the United Nations in 2000, was to “halve, between 1990 and 2015, the proportion of people who suffer from hunger”. We are on target to meet that goal, but despite these efforts, “about 870 million people are estimated to be undernourished”.

“We know that a lot of things contribute to poor nutrition and obesity but access is a key issue,” says Dr. Giridhar Mallya of the Philadelphia Department of Public Health. “People don’t have the ability to get healthy foods in their community at an affordable price. That makes it that much harder for them to be healthy overall.” See how The Food Trust and its partners are improving food access and health in Philadelphia and around the country.

Everyone deserves access to healthy food. Find out how you can get involved:
thefoodtrust.org
healthyfoodaccess.org